Day 26: Blood Brothers Count Down Day 26 of 28: We Are Nearly There: Another Extract 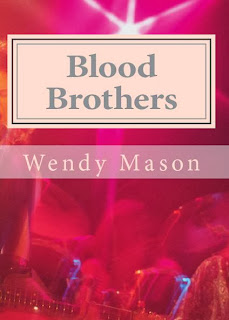 Day 26: Blood Brothers Count Down Day 26 of 28: We Are Nearly There: Another Extract

My new Book - Blood Brothers is to be launched on 1st October. This is day 26 of the countdown to the launch and here are the first three paragraphs of Chapter 1.

"Earlier that same day, while the Glamerines were preparing for their concert, a few miles away in a very ordinary house in that very ordinary Midland's town, Middleton, a girl who just might not be ordinary was getting ready to go and see them.

At that time, Jenny Blond was a 17 year old school girl studying for her A Levels. She was living a "nice girl's" life. That meant she lived in a nice house on a nice street, on the nicer side of Middleton. Jenny was the child of two well-meaning and hard-working parents who both taught at the school that Jenny attended. They lived in a shabby-chic Victorian end-of-terrace. I don't think they would have used the words shabby-chic to describe it in 1982, though. It looked out over a lovely park and they had good neighbors. There was a friendly Sikh on one side and a retired shop keeper and his wife on the other. The parents, Robert and Mary Blond, were staunch members of their local Methodist church. And, as for Jenny, she looked the kind of girl who suited her brown school uniform - it went with her mousy brown hair.

Jenny had no intention of spending the rest of her life in Middleton. She was studious at school because that could provide a route out. Her parents had expected her to be academic and she was, because she chose to be. She had her own small circle of very carefully picked friends and her one particular friend, Peggy. Peggy shared her greatest love and that was for Julian Justin and the Glamerines."

If you'd like to find out more about Blood Brothers, the book is due to be launched on 1st October 2013

You will be able to find Blood Brothers on Amazon at these links;
UK Bookstore
US Bookstore